“Buddhism” is an obstacle to Buddhism 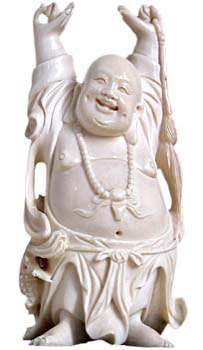 Buddha says: Let’s all be happy!

Nowadays everyone knows what “Buddhism” is. You can find it in any upscale supermarket, gift shop, or bookstore. It will be next to the scented candles and the books on healing your inner child. “Buddhism” has incense, kitschy little statues of Hotei (the “Laughing Buddha”), and wind chimes. It also has books with cute old Asian guys on the cover. They contain saccharine sayings and simplistic stories. Their core message is that if only we were all very nice, we could be happy.

Most people know they do not want “Buddhism.” They think it is obviously stupid, unrealistic, and irrelevant. They don’t believe that being nice would make them happy; they don’t want “healing”; they don’t care about “inner peace.” They want to get on with life—the real thing, not some imported Asian fantasy. (Me too.)

“Buddhism” is not such a bad thing. If everyone were very nice, the world would be stiflingly dull, but probably overall better. This kind of “Buddhism,” though, is at most only a tiny part of actual Buddhism. (Whether it is Buddhist at all is open to question.) Mostly Buddhism is not about being nice, and is not about happiness.

I worry that the word “Buddhism” has become a main obstacle to teaching real Buddhism. As soon as you use the B-word, people think wind chimes, and you have lost anyone with a realistic attitude. Instead, you attract those who want “Buddhism,” which you do not intend to provide. Much of your teaching has to aim at correcting people’s pre-existing, wrong ideas of what Buddhism is.

This problem gets worse all the time, as more and more people learn about “Buddhism.” Forty years ago everyone knew they didn’t know what Buddhism was; so they had open minds. Now many people think they know enough about Buddhism to be sure they don’t want it.

Maybe I am a worry-wart

My concern may be excessive. Most of the Aro teachers I have discussed this with think I’m wrong. They find that generally people are open to Buddhism, and not repelled by the word. Since I am not a teacher, they are probably right. (But I’m obstinate.)

What excites me about Brad Warner, and the punk dharma movement, is that they are evidence that I’m wrong. He uses the B-word, and definitely teaches Buddhism, not “Buddhism.” Yet he is popular with people whose reaction to hearing wind chimes might be to put on some nice soothing death metal and turn it up to 11, until the traumatic memory of the sound has been washed away.

Still, Brad Warner’s thousands of followers, however encouraging, are a drop in the ocean. Buddhism needs to reach tens of millions of people who hate wishful thinking, not thousands.

Some Buddhists have dismissed “Buddhism for punks” as a gimmick. Maybe it’s true that the connections between punk and Buddhism are superficial. Perhaps the analogy does not go all that far. But, at the very least, using the word “punk” proclaims that “this is a brand of Buddhism that is for people who are realistic about some things—people who hate fake niceness and moral hypocrisy and kitschy sentimentality.” That’s new and valuable.

If that is a gimmick, then what I think Buddhism needs urgently is a dozen more gimmicks. A hundred more gimmicks. Buddhism should be available to everyone—and if it takes gimmicks to reach some people, let’s have thousands of them.

Maybe we should do some brainstorming? Here’s an example. How about “Buddhism for vampires”? Vampires dominate the best-seller lists; they are nothing if not mainstream. But they do appeal to people who are a bit off-center, and open to slightly scary new ideas. And most vampire lovers are probably not into wind chimes.

“Buddhism for vampires” is intriguing: what could that be about? Like “punk Dharma,” it makes it obvious that we are not talking about nicey-nicey New Age junk.

“Buddhism for vampires” could be strictly gimmicky—annoyingly cutesy—nothing more than a quick way to cash in on two fads.

But it could also be quite serious—for those willing to explore the razor edge of life and death, lust and aggression, monstrosity and nobility, horror and beauty, romance and madness, and the eternal moment where all these converge, in non-duality. These are main themes of Buddhist Tantra—and of vampire fiction.

[Update, May 2010: I have now taken it way too far, with a whole web site devoted to Buddhism for Vampires.]

Oh, hey, by the way—did you know that Garab Dorje, the founder of Dzogchen, was also named “Rolang Dewa,” which means “Blissful Vampire”? (I am not making this up … )