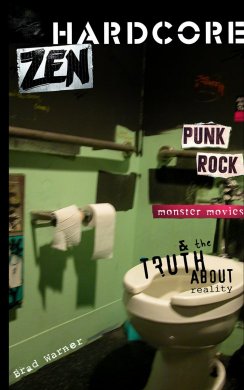 Brad Warner is a “controversial” Soto Zen teacher. I have long been a big fan of his blogs, but hadn’t gotten around to reading his books. I’ve just read his new one, Zen Wrapped in Karma Dipped in Chocolate. I liked it so much I immediately read his Hardcore Zen as well. These books cover familiar Buddhist fundamentals, so I won’t talk about what they say. Instead, this page is about how Mr. Warner says it.

He is controversial for two reasons. One is boring and one is interesting. The boring reason is that he does not apologize for breaking the Buddhist precepts. Chocolate is an account of his life in 2007, during which he smoked dope (he didn’t like it) and had an extra-marital affair with one of his students (he liked that). His main Buddhist blog runs on a porn site. He aggressively condemns teachers he thinks distort Zen, and uses a lot of swear words. (Parental advisory: offensive language appears below.) Some people have strong opinions about this. I don’t, so I find that controversy uninteresting.

Mr. Warner is interestingly controversial not for what he does or is, but for what he doesn’t and isn’t. Buddhism in the West has hardened around two poles. One approach is caught up in details of esoteric doctrines and rituals. Books from this camp are written in a stilted hybrid of Asian and Western academic styles. The other pole is mixed up with psychotherapy, political correctness, and New Age nonsense. It is described in the gooey style of self-help books. Mr. Warner does not conform to either style:

for way too long Buddhism has been the exclusive province of a) whiny intellectuals who try and make it as complicated as possible so no one but their friends can possibly discuss it and b) spaced out new age waste cases who haven’t got a single clue what Buddha was on about, but they like that little Om symbol. I’m glad to see it reclaimed by normal people. And by “normal people” I mean, of course, booze soaked heavy metal musicians in leather and studs.

The narrowing of Buddhism to two main styles raises a pair of issues. One is that both styles tend towards self-righteous self-justification. The second is that both mostly exclude “normal people.” Mr. Warner’s unusual approach addresses these problems.

Holiness—religious purity—is important to both approaches. The traditionalist approach is about being impeccably orthodox and doing everything according to the book; the Westernized approach is about being excruciatingly nice and not harming anyone or anything. Both have value, but Zen and Dzogchen see holiness, and the attempt to be pure, as an obstacle. It is just another way of reinforcing one’s self-image. As a result, the two dominant contemporary approaches risk missing the essence of Buddhism.

Much of Mr. Warner’s unusual style seems to aim at breaking through these misunderstandings. He has zero interest in tradition for its own sake, writes in ordinary (if colorful) English, and wants to make Buddhism accessible to punks and metalheads. He does his best not to be nice (although you get the sense that this is a bit of an act). His offensive language—

These days in America, Zen stuff always gets all caught up in religious ideas of righteousness and holy-ocity. Fuck that shit. (Chocolate, p. 207)

—is a way of cutting through the purity orientation, and making Buddhism available to people who have no interest in being holy.

Whatever their merits, the therapeutic/New Age and academic/traditional approaches each appeal only to small subsets of the population. Most people find nicey-nicey Buddhism stupid, and have no patience for the intellectual sort. Neither seems to have any use in their actual lives. Buddhism may not be for everyone, but it should be useful for many people who are turned off by these main available approaches. It ought to be presented in ways that would be attractive to people from all walks of life.

This is the point of Mr. Warner’s comments about Buddhism being reclaimed by normal people. It is not that academics and psychotherapists are abnormal. And it is not that anyone else really is normal—no one is. But Buddhism should be available for booze-soaked heavy metal musicians in leather and studs, and for

In Chocolate, Mr. Warner writes about his realization that he is needed, because no one else speaks to his audience:

I had a duty in North America. I know I’m gonna make half my readers throw their books across the room in disgust when I say this. There was no other Buddhist teacher like me in America. And gosh darn it all, someone like me was absolutely necessary. And too bad if you don’t like hearing that.

I was struck, reading his books, by how many echoes of my lamas I heard, particularly in their diagnoses of the ways Buddhism is misunderstood in the West. Of course, there are also vast differences. But Mr. Warner and the Aro lamas both have unusual presentations that address segments of the population that are otherwise neglected by Buddhist teachers.

Both insist that, for “normal people,” Buddhism has to be a realistic approach to the nitty-gritty of “normal” life. In Chocolate, Mr. Warner writes about Buddhism’s role in his daily life during a year in which his mother died, he lost his job, and his marriage collapsed. He says:

My life as a Zen dude is sort of an experiment. I want to see if it’s possible to live the principles expounded by Buddha and Dogen and all the rest of them without running off to a mountain and living in a cave with moss growing off my beard or whatever it is people imagine you should do as a Buddhist. If this practice and this philosophy don’t work for people in the real world with real jobs and real lives, then what good are they?

Compare the front page of the Aro community web site:

Aro is principally concerned with transforming our experience of everyday being, rather than achieving an esoteric or spiritualised mode of existence . . . The Aro teachers are not monks or nuns. They are ordained Tantrikas – whose lives are, in many ways, quite ordinary. They may have conventional jobs, or raise children. Many teach as married couples. Their wisdom is embodied in the ways they live everyday life. Facing the same life challenges as their students, they are able to offer advice that is grounded in personal experience as well as profound religious understanding.

For normal people, Buddhism has to be pruned back to its essence. This does not mean adapting it to make it palatable. It also does not mean that only “basic, introductory” material is suitable for lay people. Both those approaches have been tried, and I think they are wrong.

For both Mr. Warner and the Aro tradition, the essential practice is formless silent sitting—called shikantaza in Zen and sem-dé in Dzogchen. This is a practice anyone can do; but it is not “basic” or “introductory.” Both Soto Zen and Dzogchen say that formless silent sitting is enlightenment. Nothing is “more advanced.” There are innumerable valuable practices that supplement, reinforce, accelerate, or extend silent sitting. They are worth learning, in time, but they are adjuncts.

For both Mr. Warner and the Aro tradition, the essential scripture is the Heart Sutra. You can read it in two minutes, but it is a complete statement of the non-duality of form and emptiness, which is the high point of Buddhist doctrine. No text is “more profound.” It is valuable to study the innumerable Buddhist scriptures in depth; but they do nothing more than elaborate and comment on the theme of the Heart Sutra.

I vowed to be an asshole for the rest of my life.

What I mean by that is that I just don’t give a shit anymore . . . I’m gonna say what needs saying and do what needs doing, and if people don’t like it, tough titty for them . . . Watching my grandmother die, I realized we all have a limited time in this place . . . So I’d better get my ass in gear and at least do a few things . . . (Chocolate, pp. 206-9)

In Tibetan terms, this is “wrathful personality display.” “Wrathful” teaching largely consists of directness: saying what needs to be said without candy-coating it.

Wrathful teachers display unique, larger-than-life personalities, that express the particular work they have taken on. Mr. Warner describes his own teacher:

When I first started attending Nishijima’s lectures, I found them infuriating. His frank arrogance was contemptible. You’d think the guy believed no one on earth understood Buddhism except for him . . . Gudo Nishijima is like a force of nature. Describing his personality is like trying to describe the personality of an earthquake or a typhoon. Mostly you’re not concerned about what he’s really like so much as concerned about how to stay alive until he passes by. He’s just a little old bald man in robes but he has this voice that can rattle the walls for miles in all directions. There are times he seems to be baiting the audience to come after him, sort of like GG Allin used to do. (Hardcore, pp. 52-3)

Mr. Warner’s own personality display is highly unusual. That in itself is valuable. He writes:

I’m the kind of person who wants to do the opposite of whatever most other people are doing in a given situation. Even when I played hardcore punk I refused to cut my hair because I liked seeing how supposedly “non-conformist” punks got so upset at somebody who didn’t conform to their society. If I’m in a room full of pompous wanna-be Buddhists all trying to be pure of heart and mind, I just want to rip my clothes off, plug my Stratocaster into a stack of Marshalls and blow their fake-ass beatific smiles off their faces. All that soft soap lovey dovey good vibes shit makes me gag. But when I’m here with all the punk rock nutcases I get to be the guy who advocates quiet and equilibrium. Cool.

One of the major themes of his current teaching is the importance of understanding that Buddhist teachers are not special. He does that by writing candidly about his own life. Unfortunately, it is likely that many people will just conclude that he is not special, and that his recognition as a Zen Master was a mistake, but that other, seemingly better-behaved teachers are special.

Teaching wrathfully is the most difficult way, because it is so easily misunderstood. Mr. Warner has vowed to manifest wrathfully, near the beginning of his teaching career. That takes great courage. He will doubtless make mistakes. On the other hand, as he realized while watching his grandmother die, we don’t have any time to waste. We’ll all be dead before we ever feel ready.

What Buddhism teaches, ultimately, is a way of being—not doctrines or practices. I have learned a great deal from Mr. Warner about how to be. I would not want to be like him. Rather, I am inspired by his being unapologetically what he is.

I practice Buddhism so that I can be like myself:

[Update: I have written more about Brad Warner on another site. In return, he’s blogged about both this page and that one.]