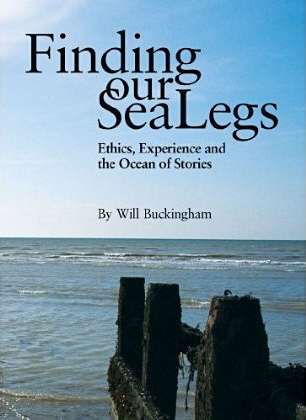 Will Buckingham writes thinkBuddha, my favorite blog. Finding Our Sea-Legs: Ethics, Experience and the Ocean of Stories is his first book of “Buddhish” ethical philosophy. It is a remarkable and important work.

The book is unconventional in form: written in colloquial English with little jargon. It tells many stories: about talking fish, million-year-old princesses, and the need to lower your mast as you near the horizon, lest your boat get stuck between the sky and the sea.

Finding our Sea-Legs is also unconventional in content. It is one of very few books about a key problem in contemporary philosophy: the tension between the urgency of ethics and their inherent ambiguity.

Buckingham is, approximately, a Buddhist, and I find the book infused with Buddhist sensibility. However, it rarely makes any explicit reference to Buddhism. Its reference point is 20th Century Continental philosophy, although it does not require previous knowledge of that tradition. (Buckingham mainly rejects its conclusions, which makes me wonder why he discusses it at all. Perhaps his editors required him to sound a bit like a conventional philosopher.)

This is an unconventional review. Rather than discussing the book in its own, Western philosophical terms, I explain why I think it is important in Buddhist terms. To do that, I will draw out what I imagine are its “hidden” Buddhist themes. (This may misrepresent the author’s intent.)

>Emptiness is a central fact of Buddhism. Emptiness may be understood as the fluidity, transience, interweaving, wobbliness, and ambiguity of all things. “All things” include ethics—so ethics are inherently ill-defined. This, no one wants to hear.

Religions and philosophers have almost always said that ethics must have a source and a foundation. There must be one true ethical system, that tells us unambiguously whether any action is right or wrong. There must be a way to know for certain that the system is the right one.

It might be nice if that were so; but it isn’t. There are lots of ways we know it isn’t, that I can’t go into here. The Heart Sutra, if you take it seriously, is reason enough. In the West, the emptiness of ethics has been recognized by philosophers since Nietzsche announced the Death of God—which included the death of any hope for a replacement source of ethical certainty.

No one wants to hear that ethics is empty, because they wrongly fear that it implies moral nihilism. We fear that if there is no solid foundation for ethics, then there can be no ethics at all. But this is a false dilemma. We can have ethics without certainty or perfectly crisp rules. The simple proof of this is that we do, usually, act ethically—and we don’t have certainty or perfectly crisp rules.

This fact has been apparent in the West for more than a century, and yet almost no philosophers have even tried to understand its implications. It has been apparent in Buddhism for much longer, but has also been firmly ignored by almost all Buddhist schools—who fear that if the supposed Law of Karma were challenged, the social order would collapse.

This may be the reason Finding Our Sea-Legs makes so little reference to Buddhism. Buddhism, I think, has little to teach us about ethics. I am afraid that is probably a controversial statement; I may explain it elsewhere someday. [Update: Five years later, I have written a series of articles about this on another site.] In the meantime, I can say that the only Buddhist system I know of that explicitly admits the implications of emptiness for ethics—Dzogchen—has, as far as I know, no more to say on the subject. Dzogchen is the practice of Buddhas; and the actions of Buddhas are said to be perfectly spontaneous and perfectly appropriate—automatically. So they have no need of ethics. What about the rest of us?

We do have ethics; and they cannot have a foundation. We wanted a foundation because we face ethical uncertainty, which is uncomfortable. We want to do better ethically. We know that we all sometimes fail through lack of ethical understanding or skill—lack of wisdom, as much as lack of will.

To make ethical progress—as individuals, and as a society—we need to better understand how we already do as well, ethically, as we do. We need to understand how ethics actually works in the real world. We really don’t know much about that.

Philosophers and religious innovators have mostly not asked this question. They like to make up simple, universal rules (“thou shalt not steal”) based on general, abstract principles. Such rules are not much use in practice. For example, most people would agree that there are times when it is right to steal—to save a life when there is no alternative, for instance. It is also often ambiguous whether a particular action constitutes theft or not.

Instead, we need to abandon theoretical preconceptions, and carefully observe the complex, concrete reality of ethical perception and action in context. There are several ways this can be done. Will Buckingham mentions two: empirical science and phenomenology. Finding Our Sea-Legs addresses only phenomenology, so I would like to say a little about science.

Several sciences have started looking seriously at the details of ethical choice just in the past fifteen years. What they are finding is surprising, illuminating, and probably useful. (If you are curious, you might like to read about the work of Jonathan Haidt in a New York Times article or an essay he wrote.)

There are two key discoveries. One is that ethics is, in part, a built-in capacity that evolved to allow social communities to function. (Chimpanzees appear to have ethics. Ethics are not entirely a cultural construction.) The second is that there are multiple ethical systems built into our brains, and they are only loosely coordinated. Ethics is not a single thing, and therefore cannot be made entirely coherent.

These facts resonate with similar conclusions that Will Buckingham comes to by means of phenomenology. Phenomenology, in his wonderfully jargon-free definition, is the study of what is it like to experience something. His phenomenology of ethics asks “what is ethical experience like?” He suggests that we need to look at “the ways in which the eyes slide to one side when we want to sidestep our responsibilities, and the sensation in the chest when we encounter another’s suffering.”

The incoherence of experience

Looking closely at experience is the essential method of Buddhist meditation. In emptiness meditation (shamatha/shi-nè), we simply allow experience to be as it is, without judgment or preconception.

In meditation, we find first that experience is incoherent. Time, as experienced, is not a uniform, continuous flow: it jumps about, speeds up, slows down, stops altogether, and changes texture. We find that the boundary between ourselves and the world is vague, shifting, and sometimes absent. Where we thought we had a self, we find disparate heaps: of memories, thoughts, emotions, and sensations. The thoughts that weave them together, which we believed were our own, are mainly just borrowed from our cultural “thought soup.”

We find, also, that this incoherence is not caused by meditation, but exposed by it. We discover that our experience is incoherent also while doing dishes, talking to a friend, or surfing the web.

We find, finally, that this incoherence is usually not a problem. We do not have to “hold ourselves together” at all times. Most contradictions in our understanding are benign. The different ways we come to know the world—through head and heart, for instance—complement each other more than they clash.

All this applies to ethics. Will Buckingham describes ethics as “a great, bewildering muddle of good-will and hope and confusion.” And that is fine. It is fine because it could not be any other way. Ethics is a complex contingent construction. It is a matter of biology and history and culture, not crystalline eternal principles.

Sailing the sea of stories

Stories and the sea are the themes of Finding our Sea-Legs.

Will Buckingham takes the telling and hearing of stories as his phenomenological method. Using that method, he finds the same incoherencies—and illustrates them with stories—that I’ve described as discoveries of meditation.

He develops the ocean as a metaphor for emptiness. (Chögyam Trungpa Rinpoche often used “groundlessness” as a translation of shunyata.) We have all, Buckingham says, always been at sea, when it comes to ethics. For thousands of years, philosophers and prophets have proclaimed the possibility of finding land: solid ground. But no one has ever reached any. It is time, he says, to turn away from that fantasy of ethical certainty. Instead, we can make genuine progress in our actual, groundless situation. Metaphorically, we can learn to be better navigators. We can study the winds and the waves and the stars; and can learn to steer around shoals, thunderstorms and whirlpools, guiding our ships into calmer waters where we can gaze at the sea and the sky and watch fish play.

Finding our Sea-Legs also uses the ocean as a metaphor for the unbounded, tangled dimension of stories. Stories do not exist in isolation, but always in relationship to other stories, and to their hearers and tellers. Likewise, we—who are hearers and tellers—do not exist other than in relationship to stories. We navigate the sea of stories as a way to make sense of experience—as a way of finding meanings.

It is wrong to suppose that each story has a meaning—the moral of the fable. In stories we find meanings, not the meaning, because like ourselves, they are shifting patchworks. Stories do not work by conveying information. They must be experienced. Stories are experienced in the body; Buckingham discusses at length the “shudder” we feel in response to ethically difficult stories. Stories transform hearers, tellers, and other stories, in ways we cannot articulate, but that are resources we use to navigate ethical difficulties. Stories are ways to bind together different ways of knowing: for instance, they may translate between religious experience and rational philosophy.

The possibility of joy

Ethics, in the Western tradition, are supposed to make you miserable. The depth of your moral seriousness is measured by the amount of agony you create for yourself around ethical choices. After the death of God, Existentialism added angst—the fear and gloom you have a duty to feel in the face of the supposed problem of moral nihilism.

All this is quite unnecessary. It is antithetical to the Buddhist ideal of the Bodhisattva, who always maintains a light heart.

Finding Our Sea-Legs aims to “ease the hydrophobic shuddering that sees, in these endless waters, nothing but the endlessly rolling darkness.” Ethical nihilism is a philosophical pseudo-problem, not a practical one. On the other hand, the author sees ethical eternalism—belief that somewhere there is solid ground—as the source of irresolvable ethical conflicts.

When we recognize that ethics can only ever be a muddle—but is no less important for that—we can work together to resolve difficulties “with all the kindness, patience, and care that we can muster.” Will Buckingham concludes that “there is no way out” of the ocean, yet ethics offers “not an intolerable burden” but “the possibility of joy.”