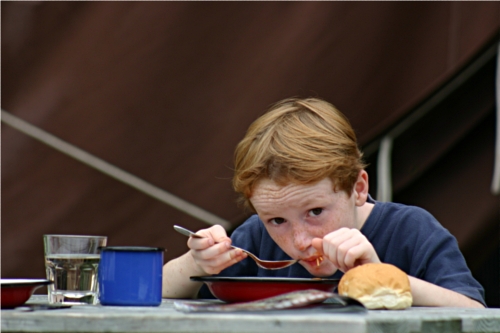 In Buddhist meditation, we discover that we do not originate our own thoughts. In meditation, we allow thoughts to come and go under their own power. They do that without our making them happen. We find that they come from empty space and return to emptiness. There is nothing personal about thoughts, when we experience them without involvement.

I find this discovery compatible with a pretty recent Western perspective: that almost all of our thoughts are taken over from our culture. Our wording may be a bit different, but almost everything we think simply repeats ideas we have heard or read or heard on TV. It is unusual and difficult to think an original thought.

We swim in a sea, or soup, of talk. These are the messages we receive from the media, and also the ways our friends explain themselves and their lives. Our thoughts mainly recycle this talk, and we propagate it when we talk ourselves.

This is not a bad thing. It is inevitable. Human beings are just not smart enough to figure everything out for ourselves. We get the benefit of centuries of millions of people figuring things out for us, each adding tiny portions to the thought-soup we live in.

Of course, some of the thoughts we take on are wrong; that is the downside of belonging to a culture. Although we can’t entirely avoid that, meditation—and other aspects of Buddhism—can help us recognize that we don’t have to believe all the thoughts that pass through our heads. We can take our thought soup with a dash of salt.

When it comes to thinking about our lives, and how to live them, there are remarkably few basic ideas available. There are innumerable isms or systems around. We might try the Enneagram or secular humanism or Mormonism or eco-activism or twelve-stepping. Or Buddhism; or any of countless others. Each of these has some peculiar ideas of its own. Mainly, though, they offer different combinations, and minor variations, of a handful of fundamental approaches to life.

In the old days, when there was such a thing as a mainstream culture, the thought-soup mainly came from that culture. Ideas from other systems were available, but only to the adventurous. Those thoughts recognizably came from somewhere other than the mainstream.

Since the mainstream culture broke down, it is no longer considered important where ideas came from. Everyone says, and thinks, things like

Almost no one in the West had ideas like these a hundred years ago. Almost no one now realizes that they come from (respectively) psychotherapeutic theory, Hinduism, Existentialism, post-modernism, and Buddhism. Almost no one recognizes that if you take such ideas seriously, they are seriously incompatible.

The ways that current soap opera characters talk about their lives incorporate ideas that were completely alien a century ago, and were heavy weirdness for university philosophy students only a few decades ago. What has happened is that key ideas of major systems have “escaped” into the culture at large. Their origins are forgotten. They have become part of our thought-soup.