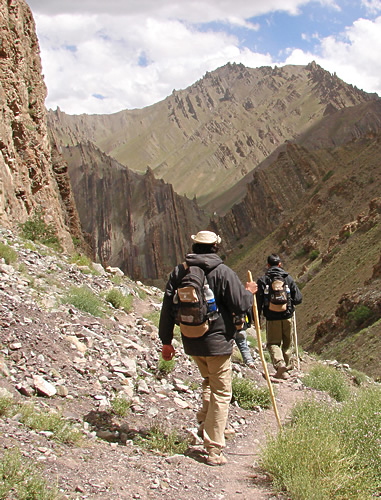 Buddhism and other spiritual systems often speak of a “path.” This metaphor is usually used briefly and vaguely. Considering walking paths in detail provides insight into spiritual paths, and why you might choose to follow one.

Spiritual paths are not much like the paths in a garden or city park. Instead, I want to compare them with hiking trails in remote, rugged mountains. The terrain of religious experience can sometimes be uncertain, difficult, or even dangerous, making this an apt analogy. (It is also a metaphor I enjoy because I live in mountains and spend a lot of time walking in rough places.)

I will explain what paths are good for, how to choose a path, and the value of trekking clubs and guides—that is, a religious community and teachers. On the next page, I will talk about the costs, risks, and benefits of going off-path.

Walking on the shoulders of giants

“If I have seen further it is by standing on the shoulders of giants.”
—Isaac Newton

A path allows you to borrow the insight and hard work of many people. Getting about in untracked terrain is slow, risky, and uncertain. Following a path is faster, safer, and more predictable.

Sometimes a wilderness path is nothing more than a series of cairns (piles of rocks) or blazes on trees (bright paint spots a few inches around, six or so feet up the trunk). Those mark the way. They are set close enough that you can just see the next one from each—perhaps one every thirty feet. Even when there is no visible path on the ground, simply knowing which direction you should be heading lets you walk a lot faster. You don’t have to keep stopping to look about and wonder if you are lost, or which is the easiest and safest way to cross the mountainside.

A spiritual path, similarly, has a sequence of way-points that let you know you are going in the direction the path-makers have worked out. To count as a path, a spiritual system has to have stages or a defined curriculum. First you do this, then you do that; and there is some way of knowing whether you have accomplished each stage.

Usually a walking trail is visible on the ground, because the path-makers have cleared the way. They have removed boulders and fallen trees. They’ve cleared away loose stones and roots. They’ve leveled out the bumps. This too speeds your way.

A well-maintained spiritual path also clears away many small obstacles. Usually this takes the form of rules-of-thumb antidotes to specific problems you may encounter on the way. (Plug: the free Aro meditation course has a lot of down-to-earth advice of this sort: how to deal with back pain, sleepiness, dry mouth, and stupid songs playing over and over in your head.)

Knowing where you are going, and a smooth path, both make walking safer. A hiking trail avoids, or clearly marks, cliffs and thorny or poisonous plants. It bridges streams that would be treacherous to ford. You are much less likely to twist an ankle walking on a level path than over a mountainside covered in loose stones. 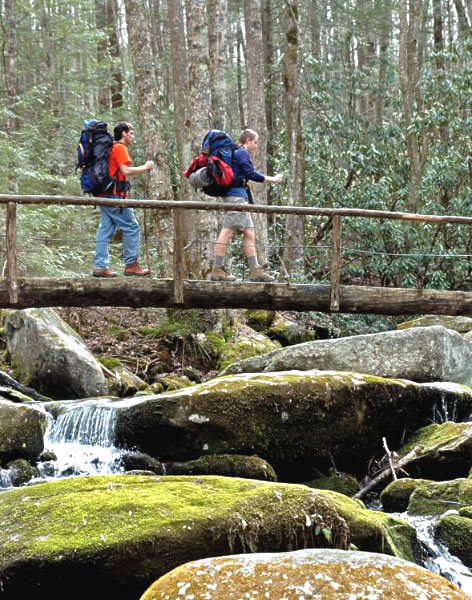 A path always takes you somewhere; and it is in a direction the people who made it thought useful. That makes walking on a path much more predictable than walking off-trail. As long as there is a path stretching out ahead of you, you can be certain that people have gone that way before, and further progress is possible.

Of course, the path may not take you where you want to get to. (More about that in a minute.) But as you follow it, you can keep checking that it is still heading in roughly the direction you want to go. In the worst case, you will have made progress in that direction. If the path runs out or turns off some other way, you can continue off-path or find an alternate route.

I choose hiking trails carefully. I have many books that describe the various paths in particular areas.

There are three questions you should ask:

People have different tastes in paths. Some people like walking in forest; I prefer an open landscape. Some people choose paths to lakes; I would rather get to a peak.

Some paths do not go where they are advertised to. If they are not regularly traveled, trails vanish. It may be impossible to see where one once was. Or, they may become impassable, due to overgrowth with thicket, landslides, or flooding. It is rare nowadays for a path never to have led where it was claimed to, but that was once more common.

the path to cannibalism

The famously disastrous Donner emigrant expedition was misled by entrepreneurs who sold them an new, supposedly faster route to California. The inventors of this trail stood to profit from traffic, but had not actually traversed their supposed path. In fact, the “shortcut” was a fantasy and virtually impassable. The emigrants were trapped in snowy mountains for the winter. Half the party starved to death, and the others resorted to cannibalism.

I suspect many spiritual paths do not go where their promoters claim. I’ll have more to say about that on a later page.

Some trails are more difficult than others, and you have to know what you are capable of. How many miles can you walk in a day? How steep a slope are you comfortable on? Some paths require special skills and equipment, if they cross difficult terrain.

Some spiritual paths are also tougher than others, and some require particular skills. The strength and skill may be physical (as in yoga), or intellectual (as in the more philosophical forms of Buddhism), or ethical (as in wrathful Tantra).

Almost everyone can walk; but walking in rough, remote terrain is a skill. You need to learn how to read a topographic map, the trick of glissading on scree, treatments for common foot injuries, methods for crossing unbridged streams, the self-arrest position that stops you sliding down a steep snowfield, and how to stash food overnight so bears can’t get it.

You can read all that in a book; but in practice walkers learn from other walkers. You can learn the basics from friends who have spent some time in the wilderness. To learn more advanced techniques, though, it’s advisable or even imperative to get instruction from actual experts. Walking clubs usually sponsor talks or guided walks led by such people. Walking clubs here are analogous to religious communities, whose experts are the ordained teachers of the religion.

I am confident on most walkable terrain, but there are exceptions. For example, I don’t walk on glaciers without a professional guide. I don’t have the specialized skills to do that safely. Glacier walking is likely to be fatal if you don’t know what you are doing.

The main value of a guide is not that he or she knows a specific path across the glacier; those keep shifting as the ice melts and slides. The guide knows the methods for glacier walking, and can make sure that you are following them correctly.

Analogously, most spiritual practice is reasonably safe, and if you don’t know what you are doing, the worst outcome is wasted time. But there are religious regions that are actively dangerous (though also worth entering). For instance, any area where religion intersects power is tricky. To walk such terrain without the guidance of a full-time professional—a Lama, for instance—courts disaster.