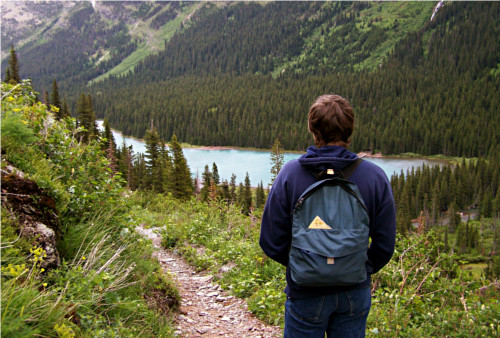 There are different ways of relating to religious or spiritual systems. I relate to Buddhism as a path.

On following pages, I will offer some thoughts about how to find a path that is a good fit for you personally. My advice assumes that you, too, take a path approach to religion or spirituality.

That is actually not usual. Other relationships are more common. All are perfectly valid, at least for some systems. Some may not go well with Buddhism. In any case, this web site might not be useful if you relate in one of the other ways.

So this page briefly compares the path approach with some alternatives: social group, faith, worldview, toolbox, and tradition. I also explain briefly why the path approach seems to work best for Buddhism. The next page explains “path” in more detail.

What makes something a path is that you can follow it.

When you are on a path, you have a direction. You can always see the right place to put your foot next. (Except at trail junctions, where you have to choose.) You can see some distance ahead along the path, and where that will take you.

If you don’t like the direction the path is taking you, you can go back to the last junction and try a different route, or you can walk off the path altogether.

A path may have a destination. Not all do; you may just be walking to enjoy the scenery.

Paths often have a sign at the start saying where they will take you. Sometimes the sign is wrong. That is rare for a city park, but not uncommon in the wilderness. My guess is that it is usual for spiritual paths to be mislabelled. (However, it is impossible to be certain without following them all the way to the end.)

Until you get to the destination, you can’t really know what it is like.

Even if a path has no destination, or the destination is not as claimed, it allows movement. If you can’t take the next step, or if stepping doesn’t change anything, there is no path.

Paths don’t appear spontaneously; they are made by other people. When you follow a path, you go where others have gone before. Some may have written about the route. Some may give you advice along the way.

When people deliberately look for a religious organization, often it seems their real goal is to find a comfortable social group. They look for “people like us” who share their values, social class, interests, and lifestyle. Such a group can be emotionally supportive, provides some intellectual entertainment, and confirms the rightness of your life choices.

It is true that you need to get along reasonably well with your sangha (Buddhist community). However, for Buddhism to be effective, it needs to undercut your basic assumptions about life—your “reference points.” An excessively comfortable group, which constantly validates your reference points, is an obstacle.

I would like to actively discourage you from joining a Buddhist group for social support, or as a source of like-minded friends. That wastes other people’s time and emotional energy, and diverts the group from its proper purpose.

Buddhism is probably a lousy religion if you are looking for a social group, anyway. Some of my best friends are Buddhists, but on average we Buddhists are a tiresome lot. I recommend Mormonism. The Mormons I know are all kind, friendly, reliable people.

For some religions, the important thing is that you believe in them. Faith is sufficient to make you a member. This is true of some Christian sects, for instance.

Some people approach Buddhism this way. They read Buddhist books and agree with what they say. They think of themselves as Buddhists, without wanting to join a Buddhist group, and without doing Buddhist practice.

There’s nothing really wrong with this; but it misses almost everything about Buddhism that matters to most serious Buddhists. Buddhism is primarily about doing, not believing. It is a religion of “methods, not truths.”

A worldview (or “philosophy”) is a system for understanding meaningness: life, the universe, and one’s place in it. A worldview is not necessarily a faith; it can be a method for looking, rather than a set of claims you are supposed to believe.

Some religions and related systems mainly provide a worldview. This includes particularly ones described as “spiritual but not religious.” A current example might be the work of Ken Wilber and his associates.

Buddhism is sometimes said to be “a philosophy, not a religion.” Buddhism is certainly atypical as a religion, and might not be one at all (depending on how you choose to define “religion.”) It’s not really a philosophy (or worldview) either, though.

A worldview is not—by itself—a path. It is not a path because it does not show you where to put your foot next. It might provide some overall sense of direction (“the purpose of life is the positive evolution of consciousness”). It does not answer the question “what can I do for the next fifteen minutes that takes me that way?”

An almost opposite approach to “faith” is “toolbox.” “Faith” is belief without method; “toolbox” is methods without belief. A toolbox provides various methods that take you in different directions.

Nowadays, many people take a toolbox approach to spirituality. They learn techniques from many different systems and apply them as they seem useful. Some quasi-spiritual systems—human potential seminars, neurolinguistic programming, and workshops rooted in psychotherapeutic ideas—are probably best approached this way.

The toolbox approach can show you where to put your foot next—it includes methods that produce local movement. What it does not provide is an overall sense of direction.

Buddhism does provide a toolbox. (Its Nyingma branch, to which I belong, provides an unusually, overwhelmingly vast smorgasbord of methods—so large that you actually can’t make it part of you, and you can easily get lost wandering between the buffet tables, if you don’t have guidance.)

But Buddhism also provides a worldview for direction, social structures for guidance, and a tradition that may give some confidence. Together, those add up to a path.

Most people inherit their religion from their parents or ethnic group. They see no reason to switch. That may be inertia, or the legacy may be a positive reason to stick with the religion.

This is usual for Buddhists in Asia. It has been rare in the West, because Buddhism isn’t traditional here.

However, it is increasingly an issue for second-generation Western Buddhists, who have to ask whether they want to keep the religion of their parents.

The most interesting answer is “Buddhism, yes, but not my parents’ Buddhism.” That answer is starting to lead to new approaches, which may be valuable in current cultural conditions.