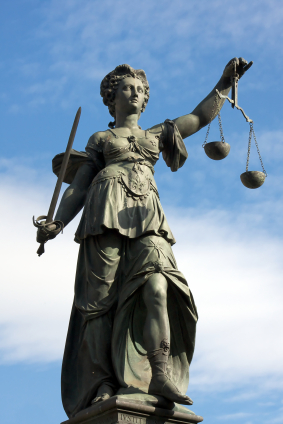 Dzogchen rejects the Law of Karma. This is the main reason Dzogchen is condemned by some Buddhists. Even for Westerners, who have no cultural belief in karma, it can be difficult to let go of hope for cosmic fairness. However, genuine ethical action is impossible if we are motivated by reward and punishment.

It seems obvious that the world is unjust. Bad guys often get away with it. Our own good deeds are rarely rewarded as we think they should be. Some other people fare even worse, through no fault of their own. One reason we turn to religion is to find out why the universe is so unfair and screwed up.

The answer of most major religions is that the universe is not screwed up. It seems that way because we only see part of the picture. The injustice we see is balanced by cosmic justice somewhere else—probably after we die. In some religions, God rewards or punishes the dead, according to His Law.

Buddhism is widely believed to have a similar view: the Law of Karma. According to this understanding, the apparent injustice of our present lives is actually the balancing reward or punishment for our actions in previous lives. Our actions in this life will be rewarded or punished in future ones.

there appears to be a contradiction here

This understanding of karma requires that the Law somehow be certain, eternal, external, constant, and universal. Yet it is a fundamental Buddhist principle—expressed for instance in the Heart Sutra—that nothing can be certain, eternal, external, constant, or universal. (Space/emptiness is the sole exception.) There appears to be a contradiction here. Buddhist systems have taken various approaches to resolving this contradiction; I do not find any of them coherent. They all seem to talk around the problem, and confuse the issue in order to distract attention from it.

Dzogchen is unique in biting the bullet and admitting that there is no Law of Karma. According to Dzogchen, there is no cosmic justice. Dzogchen does not deny karma altogether, but denies that its operation is certain, eternal, external, constant, or universal. The Dzogchen view is that karma is a matter of habit—and therefore empty. If we habitually act in particular ways, we tend to view the world in corresponding ways. If we act aggressively, out of anger, our victims are likely to retaliate. Then we will find the world dangerous. Our anger and paranoia are likely to increase, and this may escalate indefinitely. If we are generous, others may be inclined to reciprocate. So we live in a world partly shaped by our actions and perceptions. However, there is no guarantee in this.

This view is considered unacceptable by many Buddhist officials. Their immediate response is that the Law of Karma is the only possible basis for ethics. The reason not to kill other people is that if you do, you will go to hell. The reason to donate money to Buddhist officials (an important aspect of ethical behavior) is that if you do, you will be rich in your next life. If people did not believe in the absolute Law of Karma, social order would collapse.

I think of Dzogchen as “calling Buddhism’s bluff.” Theoretically, all Mahayana and Vajrayana Buddhists accept the Heart Sutra as central and definitive—but its obvious implications are often ignored in practice. Dzogchen insists that we take it seriously, and not explain it away with hedges and obfuscations. This is what has made Dzogchen unpopular with some Buddhist officials—to the extent that at times they have banned it.

I suspect that they actually understood perfectly well that there is no Law of Karma. Their real concern was not that Dzogchen is wrong, but that it is administratively inconvenient. The important thing was that it not be taught to the masses—because the masses’ belief in the Law is, supposedly, what keeps them in line. Often a compromise was reached: Dzogchen was permitted, but only if it were kept Very Secret, and taught only to the elite.

the universe is
not about us

Personally, I have found that a vague, incoherent expectation of cosmic justice is one of the hardest aspects of our Christian heritage to shake off. I am a life-long atheist, and have never actually believed in cosmic justice. Yet I still sometimes catch myself hoping that I will somehow be magically rewarded for good deeds.

I have noticed that acts I hope to be cosmically rewarded for are often rather useless. Most involve personal sacrifices that do not benefit anyone much. Deeds that have obvious beneficial effects seem just plain sensible—and so the hope for reward does not arise. This suggests that the assumption of cosmic justice leads to distorted, unrealistic ethical action.

In fact, if there were perfect justice, ethical action would be impossible. Far from being the basis for ethics, belief in cosmic justice negates it. There is nothing ethical about doing “good” in order to go to heaven, or to have a better rebirth. That is just self-interest.

I am against justice

Personally, I am against justice. The desire to punish others seems to me mean-spirited and self-righteous. I want everyone to live happily ever after. I would like to see a good outcome for war criminals, serial murderers, and child-rapists. If there were a heaven, I would want everyone to go there. Why not? Why be stingy? It wouldn’t cost any extra to let more people in.

Human justice and punishment are probably a pragmatically necessary evil, as a deterrent. Hell—if it existed—would be an abhorrent cosmic evil.