Buddhism in the West 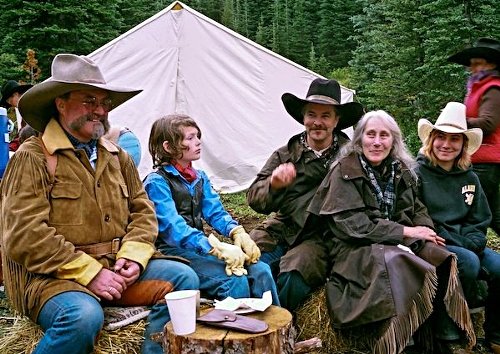 Buddhists in the West. Ngak’chang Rinpoche on left, with son Robert and students

Through its history, Buddhism has traveled from country to country. Each time, some aspects of it have changed to suit the new culture.

Every Buddhist teacher, wherever they were born, now agrees that some aspects of Buddhism will change in the West. However, there are sharp disagreements about what should change, and about how to decide.

The position a Buddhist group takes on this question is one of the most important aspects of “fit”—that is, whether the group will work well for you personally. So I think it is important to understand the spectrum of options. For those interested in approaching the Aro lineage, it is important to know where it is placed on that spectrum.

Both of these approaches have much to recommend them. Each is a good fit for some students. However, both also are potentially problematic.

The “take as much as possible” approach may create unnecessary obstacles. There are aspects of Asian Buddhist practice that are inessential. They just reflect Asian secular culture, and cannot function in Western cultures. For Westerners, learning and practicing them is alienating, difficult, and in the end a waste of time.

Also, this approach depends on Buddhism “working” optimally in Asia. I am not convinced of that. Buddhism “working” means that it produces personal spiritual progress—ultimately, full enlightenment. Much supposedly Buddhist practice in Asia does not even attempt that. It serves practical, political, social, and entertainment purposes, not religious ones.

So, for me, the best fit is to be found in a “middle way” between these extremes. My guess is that some middle position will be the most useful for most students of Buddhism. Many Buddhist teachers agree. Most Buddhist groups in the West are to be found at some point along the way between traditionalism and assimilation. The Aro lineage, to which I belong, is an example.

Being in the middle can be uncomfortable. You may get flak from both sides.

Traditionalists may call you “inauthentic.” They may say that your group is no good because it doesn’t teach some practice they think is critical. And that you are not really a Buddhist at all, because you do things somewhat differently than they are done in Japan or Thailand or Tibet.

If you are in the middle, Westernizers may make fun of you for adopting some Asian principles and customs. “Why should Westerners pretend to be Asian?” They say that ordained Western monks and tantrikas are “playing dress-up” when they wear traditional robes. They think it is silly to play Asian musical instruments in religious ceremonies. They may find Buddhist concepts of teacher-student relationships uncomfortably authoritarian. They may say that your Buddhist ideas about negative emotions conflict with principles of psychotherapy and so are unacceptable.

I have a “live and let live” attitude toward ideological conflicts in Buddhism. I think all approaches are valuable for some students. I am not interested in arguing about which is “right” or “best.” That means that I can politely ignore rude comments about my lineage being too traditional or too Western. I guess I do have an opinion about this, though. My opinion is that it would be better if everyone did their own thing, and let other Western Buddhists get on with theirs.