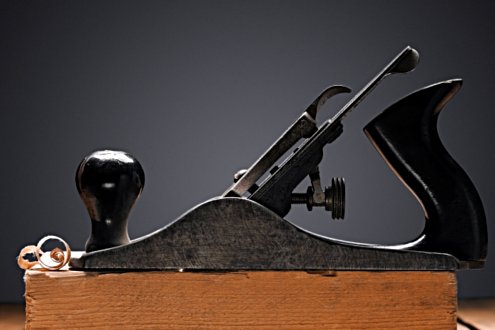 A jack plane, used to shave wood off quickly

Buddhism is not big on Truth.

The major value of many Western religions is that they are The Truth. That is why, it is said, you should practice those religions. In many cases, believing in The Truth is the primary form of practice. So long as you believe, God will save you.

Buddhism is an non-theistic religion. If you want to be saved, you have to do it yourself.

For this reason, Buddhism is pragmatic. It is a religion of methods, not of Truth. The methods are ways of approaching enlightenment.

(That is not to say that Buddhism endorses falsehood. One of the Five Precepts—the basic Buddhism ethics—is to tell the truth, rather than lies. But, as usually understood, this concerns primarily everyday truths and lies, not big religious Truths.)

there is only one Truth: non-duality

For Buddhism, there is, actually, only one big-T Truth: the non-duality of form and emptiness.

Any other religious statement is useful only if it helps on the path. That means that they are themselves methods. They are pragmatic approximations.

These methods have different characteristics, so they may work better or worse depending on the specifics of the board and what you are trying to accomplish. The band saw is fastest, but it will leave a ragged edge. It’s also dangerous unless you know exactly what you are doing. Using a sander will be slow if the board is thick, but might be quick enough if it is thin. It will leave a smooth edge, but it may be hard to judge the five-inch mark unless you pay close attention.

Often it is best to combine methods. You might take off a bit less than a eighth-inch with a jack plane, and finish the job with the sander, to get a smooth edge.

Methods differ, and it is often impossible to apply more than one at a time, because they have contradictory requirements. Attempting to use the band saw and jack plane simultaneously would be disastrous. They are incompatible, but they do not inherently conflict. The band saw is not right or wrong; the plane is not right or wrong.

What is important is to know when to apply which method.

Buddhism contains innumerable methods. All are valuable, in particular situations. None is right or wrong. Methods cannot contradict. However, they have contradictory requirements. For example, one usually cannot apply methods of Sutra and Tantra simultaneously.

religious statements are not True; they are useful

Buddhism regards religious statements as methods. They are not eternally True. They are approximations to reality that are useful to act on in particular circumstances.

When methods are misunderstood as potential Truths, their seeming contradictions become a problem.

As a slightly silly example, according to Kriya Tantra, onions are religiously impure, and one must never eat them. From point of view of other Buddhist yanas, onions have no religious significance. “Onions are impure—never eat them!” and “Onions are fine—enjoy them!” are superficially contradictory. But both of these statements are pragmatically useful methods. When practicing Kriya Tantra, there are excellent reasons not to eat onions. When practicing Inner Tantra, there are excellent reasons to eat them.

“So, are onions really impure, or not?!” That is not a useful question. Kriya Tantra and Inner Tantra are like the jack plane and band saw. Both are useful, but you use them differently, and apply different safety precautions. This can be hard to grasp at first when one is familiar only with religions of Truth.

This explanation of truth and methods is the view of Dzogchen. Dzogchen means “utter completeness” in Tibetan. Dzogchen is the most inclusive of Buddhist approaches. It includes all other forms of Buddhism, as methods, that can be applied when useful.

Each Buddhist yana has its own, distinctive account of truth.

You might be familiar with the account from Sutra, in terms of absolute and relative truth. According to Sutra, the only absolute truth is emptiness. All other truths are relative.

This is absolutely correct. However, it can be misunderstood. The tendency is to equate “the relative truth” with the common-sense consensus view of the world, and to see the absolute truth as something abstract and incomprehensible that is accessible only to Buddhas. This leaves the everyday view of the world completely intact in practice. The truth of emptiness is acknowledged as a holy theory, but may have no effect on one’s view of everyday reality.

The Dzogchen explanation makes it clear that there is not one relative truth, but many, which superficially conflict. Having adopted that explanation, we cannot continue with business as usual. We learn to see the world in many different ways. That breaks up our ordinary way of operating.